A dexi.io data set can be seen as a table in a relational/SQL database, a collection in a NoSQL database or a single sheet in a spreadsheet. A data set has a data type defining the fields for each row in the data set. Rows can be added (inserted), viewed, modified (updated) and deleted (CRUD).

Data sets in Dexi have a feature that, in one sense, makes them more advanced than their SQL counterparts: the key, or primary key using SQL terminology, used to determine duplicate/matching rows is dynamically configurable even after data has been created. Data sets with this feature can be used for data deduplication (duplicate detection) and record linkage.

Example
The dynamic key configuration can be used to build and maintain a truth table where rows with similar values are matched, or merged. Example:

Inserting row B into a data set containing row A using the appropriate key configuration defined on the data set (explained below) can automatically identify row B as a duplicate, or match, of row A, even though the values for Product Name and Display Size and not equal, e.g., the value for Product Name in row B contains a spelling error.

The details and the different variations are explained in the sections below. 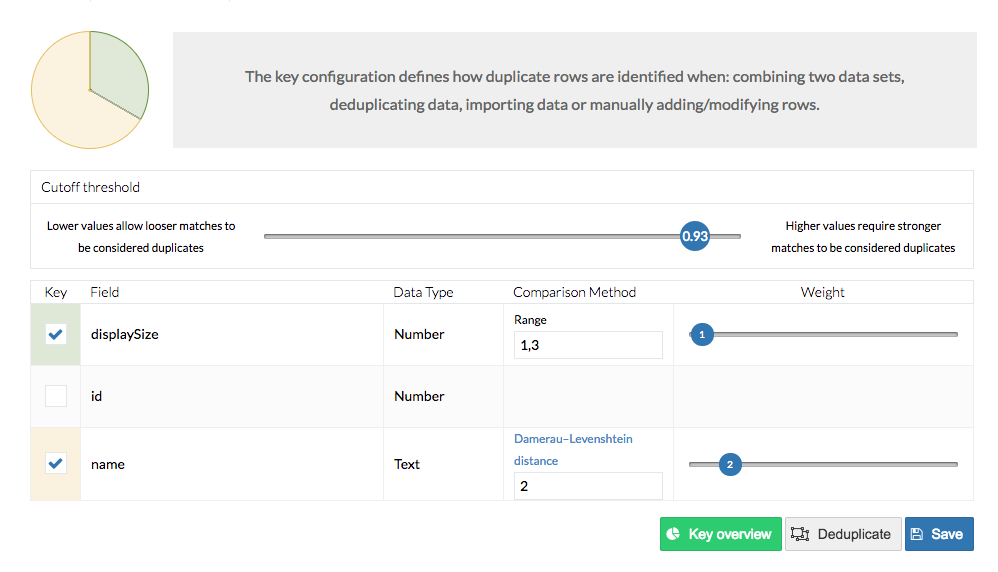 For each field of the data type of the data set, the user selects the fields he/she wants to be part of the key and for each key field define:

When a row is compared to existing rows in a data set operation (see Operations) a similarity score, or just score, is calculated for each new row using the weights:

The cutoff threshold, or just threshold, defines the value which the row score must be equal to or greater than to automatically be identified by the system as a duplicate and is used in combination with the score as follows:

Currently, data sets only support strings (text) and numbers for fields to be used as keys.

Also, fields containing certain string values might not function correctly when used as keys, e.g., URL values such as http://lp2.hm.com/hmgoepprod?set=source[/48/39/483969543703ea3068505965bdacff97fae24ad8.jpg],origin[dam],category[ladies_sockstights_tightleggings],type[DESCRIPTIVESTILLLIFE],res[m],hmver[1]&call=url[file:/product/style].

If you need to use such values for keys, define the key on the data type instead, as described in What are Data Types?

Manual Verification (Matching)
A new row that does not have a high enough score (cf. explanation above) to be automatically matched by the system must be manually verified as a duplicate row.

The match candidates are presented to the user and he/she selects, i.e., verifies, which match candidate best matches the new row. If for whatever reason, such a row does not exist, the row can instead be inserted as a new row.

Manually verified rows are skipped when comparing rows. The motivation for this is to avoid the system automatically changing (merging/splitting) rows on which a lot of time and effort have potentially been put into.

Any change to the key configuration and consequent operation can result in new rows that must be manually matched. See also Deduplication.

Real (Master) Data & Duplicates (Parent/Child Rows)
Whether or not a row was automatically matched by the system or manually by the user, such a duplicate row can be viewed as a child row to the existing row that was chosen as its match.

Only parent rows should be seen as the data set's real data or master data.

Transitive Matches
Child rows should not be seen as actual data but can serve as match candidates for new rows, resulting in transitive matches:

Only one level of matches is stored so in the example above the new C row will get A as its parent.

Comparison Methods
As mentioned above, the individual values of the fields that make up the key are compared to produce a score for the row. Each comparison method can be configured to tell the system how dissimilar, or how "far apart", two values are allowed to be while still being considered duplicates/matching.

Deduplication
When the key configuration changes, the data set must be deduplicated. Changes in a comparison method, a weight, the threshold or which fields make up the key can e.g., result in rows previously being automatically matched now being seen as distinct rows or rows requiring manual matching.

Because a deduplication operation can take a while for large data sets, the user will be asked if he/she wants to run deduplication immediately after the change to the key configuration.

NB! Not running the operation immediately will cause the data in the data set to become inconsistent with the current key configuration and such a data set should not be used for purposes other than test/debug.

Combine (Record Linkage)
The rows of one data set can be combined (merged) into another data set using the combine functionality. The operation happens one row at a time and the key configuration is used as described in Key Configuration.

Operations
On large data sets, some operations can take a while. Currently, this covers deduplication and combine. 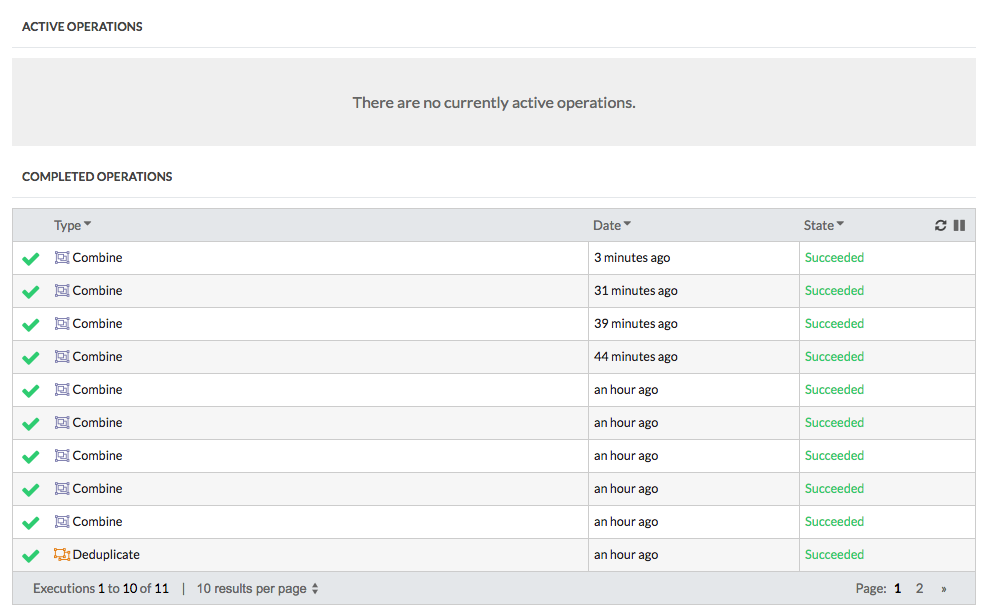 Importing a CSV and manually adding/modifying rows are not considered operations and will not appear on the Operations tab.

Data Sources
The sources of rows for data sets can be pretty much anything, e.g.:

Was this article helpful?
Thank you for your feedback! Our team will get back to you
How can we improve this article?
Your feedback
Comment
Comment (Optional)
Character limit : 500
Please enter your comment
Email (Optional)
Email

By entering and using this site, you consent to the use of only necessary cookies to enhance your site experience and improve our services.